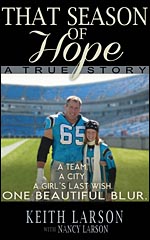 Who knew a radio guy could write? And who knew Keith Larson had a soft side?

Larson, the longtime WBT radio morning host who specializes in political zingers, has penned a sweet, honest and surprisingly good book called “That Season of Hope.”

On the 10th anniversary of the Panthers’ 2003 Super Bowl season, Larson examines that year through the prism of an extraordinary girl – 12-year-old Hope Stout, a spunky, redheaded Carolina fan who was dying of bone cancer.

For those who don’t remember this true story or who have never heard it, Hope was asked by the local Make-A-Wish people what her heart most desired. Her wish? To raise enough money to help the other 155 children on Make-A-Wish’s local list have their own wishes granted.

On Dec.19, 2003, Larson read about Hope in a story by The Charlotte Observer’s Elizabeth Leland. Larson ultimately never met Hope in person, but he did interview her live on WBT radio that same day for 11 minutes and 50 seconds.

“Those 11 minutes and 50 seconds changed my life,” said Larson, who still replays that interview every December on his show. ( Thatseasonofhope.com has audio of the interview and many others.)

Larson, 57 and the father of two daughters, would end up getting heavily involved in the fund-raising effort. A million dollars were needed to grant those 155 wishes. It was ultimately raised.

Hope passed away before the final big fundraiser. She died on Jan.4, 2004, the day after the Panthers’ home playoff win against Dallas, surrounded by her family and her precious cats. Her legacy has lived on through her family and their foundation, “March Forth with Hope.”

The Stout family cooperated with Larson’s book, as did former Panther Kevin Donnalley, who was deeply involved in Hope’s cause during her life and has remained so for the decade afterward.

Larson and his wife, Nancy – who gets a writing credit as well for her organizational help – will make no money off this book. Author proceeds are being split among three charities – March Forth With Hope, Make-A-Wish and the Carolina Panthers’ “Keep Pounding” cancer foundation.

“I wrote this book because I want the story preserved and to keep getting it out there,” Larson said. “And I wanted other people to be able to know how this felt. It was an incredible moment in time, both the Hope moment and the Panther moment and the way they intersected. It was just an incredible feeling. That feeling still lives in me, and I wanted to try and capture that and offer it to others.”

The sports-writing part of the book rings true. It helped that Larson had access to Donnalley’s private videotapes. The former Panther had the foresight to put a camera on much of the locker room hijinks and speeches during that “Cardiac Cats” season.

The book is at its most powerful and poignant when describing Hope’s personal battle. This, for instance, describing a day when Hope felt a little better than usual: “She felt terrific in that way that when you’ve been sick for a long time and you’ve forgotten what feeling good feels like and you can’t imagine you ever will again … and you’re not even close to being truly better but it’s such a startling change to feel even a smidge of good again after the horrible you’ve been feeling … that’s how Hope felt that morning.”

Larson had wanted to write the book for years. (Full disclosure: I consider Larson a friend and am an unpaid guest on his radio show every few weeks.)

But life kept getting in the way.

Ten years later, he got it done. As he wrote in the book’s dedication: “Hope – I’m sorry this took so long.”